A History of Finnish Businesses in the Thunder Bay Area

In 2002, The Thunder Bay Finnish Canadian Historical Society (TBFCHS) supported and sponsored the publication of A History of Finnish Businesses in the Thunder Bay Area (2006). The publication was compiled and edited by Martti Kajorinne and a team of dedicated volunteers.

A History of Finnish Businesses in the Thunder Bay Area (2006) is a rich historical resource that links the generations of Finnish immigrants in Northwestern Ontario through detailed genealogical information with the businesses and organizations they created and nurtured. History has shown that once the Finns started settling in the Thunder Bay area, they opened their own businesses. The various businesses had and still have a distinctively Finnish character. Today, Thunder Bay and Northwestern Ontario have imbibed the Finnish character of a distinctive community.

Both former cities of Port Arthur and Fort William, which today form the City of Thunder Bay, had, from the earliest days, their own Finnish business districts: the former on Bay Street and the latter on east Simpson Street. Bay Street still remains Finnish in character: the language is spoken in practically every establishment; Finnish imports are sold; and Finnish style cuisine is offered.

The process of developing the publication began with the circulation of a form, requesting input from those who had relevant information. An interview featuring Martti Kajorinne on the Morning Show on CBC radio in November 2002 helped to launch the book project. A website was set up; printed information was distributed; and letters were mailed.

The project team interviewed hundreds of people and collected information on approximately 200 Finnish businesses that operated in Thunder Bay and the surrounding area. They also taped interviews with 25 early Finnish settlers. The interviews, which lasted approximately two and a half hours, were then transcribed and edited for inclusion. Business enterprises, described in the book, include photographs and maps and cover a spectrum, from service and manufacturing, to forest harvesters, commercial farmers and post offices.

Collection and interpretation of data required 4,000 hours of researcher time. In addition to directly soliciting information, photographs, and oral history interviews, information was collected through the creation of a web and online forum. Questions posed on the forum ranged from stories of family immigration to recollections of the beginnings of the businesses, the accounts of various Finnish businessmen/women in Thunder Bay, ethnic profiles of the clientele and employees, and the challenges in dealing with people from different cultures. The resulting information is sorted by category, name, location, owners, duration and comments.

After five years, the TBFCHS’s enthusiastic quest into this project has culminated in a 230 page comprehensive resource. The book is an essential tool for researchers seeking specific references for biographical or economic studies. The market for this book includes archives, libraries, genealogists and researchers around the world.

“The book is dedicated to those Finnish immigrants and their descendants who worked hard to carve out a new life in the Thunder Bay area. It was their perseverance, through good times and bad times, which allowed them to leave their mark on the past. Present and future generations should be proud of the legacy left to them by their predecessors in this land of many opportunities” (Kajorinne, Martti 2006).

The TBFCHS’s hope is to preserve history that would otherwise have disappeared. The Society is to be congratulated for supporting the continued promotion of Finnish culture.

In conclusion, the TBFCHS gratefully acknowledges the support of the Government of Ontario Ministry of Citizenship & Immigration through the Ontario Community Builder’s Program. The Ontario Historical Society is also to be acknowledged for its leading role in support of this endeavour. 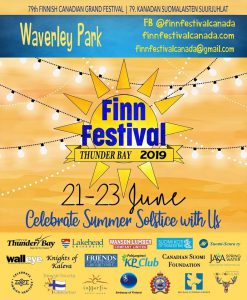 Check out our Events page